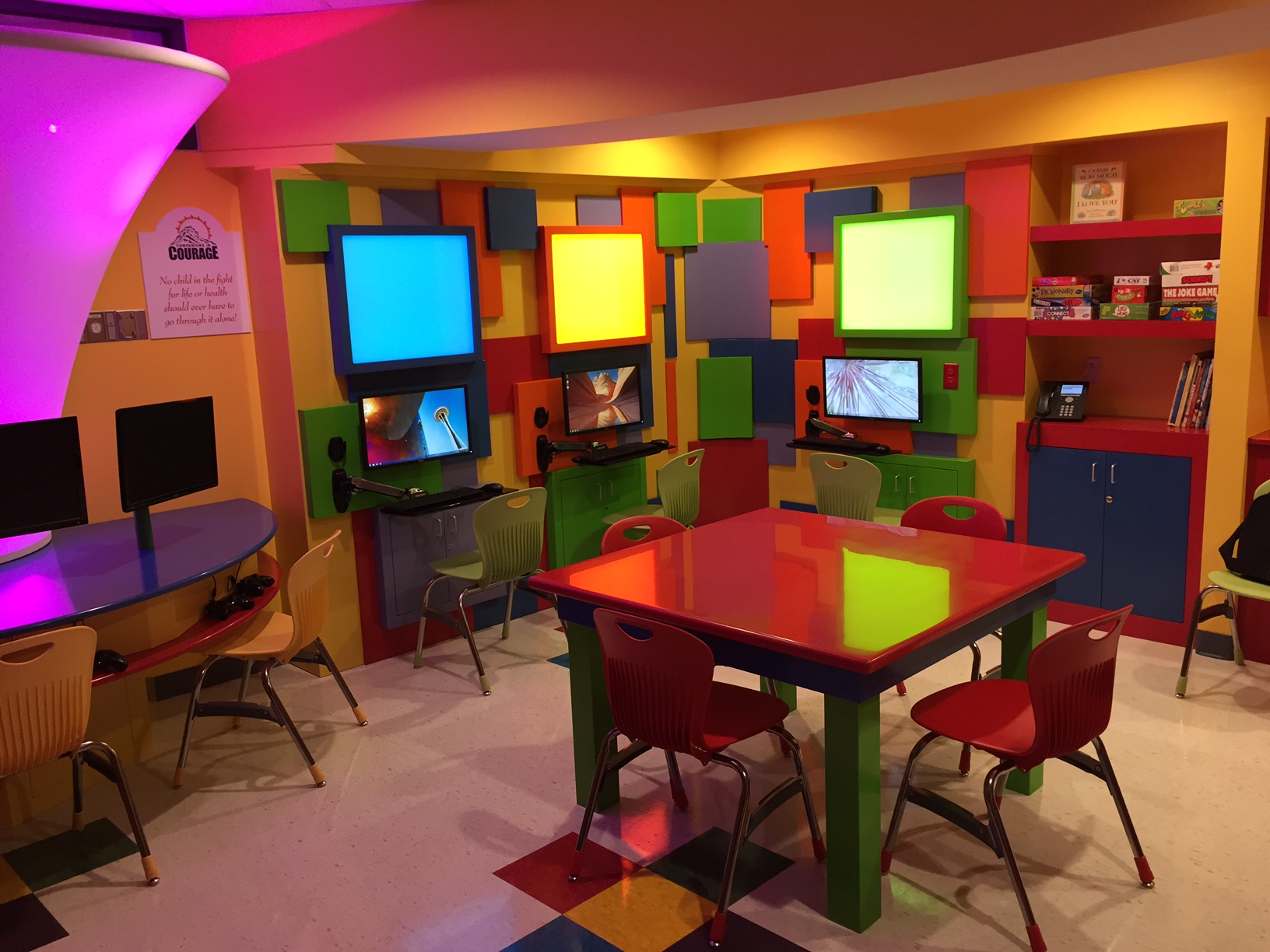 About the Companions in Courage Foundation

The Companions in Courage Foundation was originally founded by NHL Hall of Famer, Pat LaFontaine in 1997. We are recognized as a 501(c)(3) charitable organization and eligible to receive donations. In just the last five years our efforts have gone to raising funds to build interactive playrooms in hospitals throughout North America. Through innovative communications tools, these playrooms replace the isolation of a hospital with a connection to family, friends and celebrities during each hospital stay.

By virtue of their location (primarily in major metropolitan areas), children’s hospitals tend to be safety nets to the most vulnerable in our society. On average, these facilities devote almost half of their care to children of low-income families.

Our “Lion’s Den” rooms were designed by Edwin Schlossberg and his renowned ESI Design team in New York City. We are supported by generous individuals and corporations that include Microsoft Corporation, Google and Cisco Systems.

Our mission is quite simple. No child in the fight for life or health should ever have to go through it alone. At Companions in Courage Foundation, we are here to give courage, friendship, compassion and support to those children and families who are overcoming illness and life-threatening obstacles.

As part of the NHL’s Centennial celebration in 2017, LaFontaine was recognized as one of the Top-100 players in the history of the game. He currently is in 15th place All-Time in Points-per-Game (1.171) and 17th All-Time in Goals-Per-Game (0.541). A perennial All-Star in the National Hockey League, Pat LaFontaine was not only a great player, but also a great humanitarian in whatever city he represented. That combination was recognized in 2003 when it was announced that LaFontaine would be the first player inducted into both the Hockey Hall of Fame in Toronto and the U.S. Hockey Hall of Fame in Minnesota in the same year.

The evolution of this Foundation began during Pat’s years with the Buffalo Sabres. Dedicating much of his off-ice time at Buffalo Children’s Hospital, Pat began to appreciate the power of another person’s strengths. “Being with these kids – knowing their smiles, their pain and their courage – changed my life. They taught me about life and death. These children left me with a simple reality: We don’t always have much control over what happens to us, but we do have a choice in how we respond.” And that he did.

In 1998, after 15 years in the NHL, Pat retired prematurely as a result of a series of head traumas and concussions suffered through his career. With support and inspiration from family, friends and most of all, the kids in those hospitals, competing not for goals, but for life, Pat drew upon their courage and got through the most difficult time of his life. From that point on, Pat’s fight for children took on new meaning and clearly defined where all his time and energy were going to be focused: helping kids through this Foundation.

Pat LaFontaine was inducted to the Hockey Hall of Fame on November 3rd, 2003 in Toronto. LaFontaine, a center and one of the highest-scoring American-born players of all-time, played with the New York Islanders, the Buffalo Sabres and the New York Rangers before ending his career in part because of concussion problems.

How You Can Help

How can I make a gift to the Companions in Courage (CiC) Foundation and how do I address my check?

If you want to make a direct monetary contribution, all checks should be made payable to the Companions in Courage Foundation and sent to our address at:

Other ways to donate, including sponsorship opportunities, can be found on our website; just click on the “Donate Now” button.

Is my gift to the CiC Foundation tax-deductible?

The CiC Foundation is a 501(c)(3) organization, and as such, your gift is likely tax deductible. (Federal ID #16-1493691). All gifts that qualify as tax-deductible, however, are based upon recent decisions and rulings upon federal tax laws and regulations now in effect. Please consult your attorney or CPA as to the applicability of any items to your personal situation.

How can I make a gift to the Companions in Courage (CiC) Foundation and how do I address my check?

If you want to make a direct monetary contribution, all checks should be made payable to the Companions in Courage Foundation and sent to our address at:

Other ways to donate, including sponsorship opportunities, can be found on our website; just click on the Donate Now button.

Is my gift to the CiC Foundation tax-deductible?

The CiC Foundation is a 501(c)(3) organization, and as such, your gift is likely tax deductible. (Federal ID #16-1493691). All gifts that qualify as tax-deductible, however, are based upon recent decisions and rulings upon federal tax laws and regulations now in effect. Please consult your attorney or CPA as to the applicability of any items to your personal situation.

How is the money used?

The CiC Foundation works with hospitals throughout North America to deliver the “Lion’s Den” rooms which use technology in the healing process. Money raised by CiC is used to offset the design fee for the creation of the rooms and to fabricate the walls, ceiling and furniture that give the Lion’s Dens their unique look and feel. The CiC Foundation maintains the lowest possible expenses by soliciting donations, including administrative and operational support, from some of our generous benefactors. Partners such as Microsoft, Cisco Systems and Google provide technical support and resources to connect these rooms.

Where will the money be spent? Location?

Can I make a pledge and set up a payment plan?

Pledge payments may be set up annually, semi-annually, quarterly, or on a schedule that fits your situation. Payments may be made by cash, check, credit card authorization or money order. The Companions in Courage Foundation is also able to accept gifts of securities via electronically transferred shares. Please contact jjohnson@CiC16.org to receive detailed instructions on how to execute a transfer.   More information can be found by clicking on the “Donate Now” button.

Where can I see what the CiC Foundation does?

Please click on the “News” tab on our website to see the foundation in action and some of the young people who have benefited from the generosity of “companions” like you. For more information on the CiC Foundation, please write to the following address or call.

Will I have an opportunity to meet with Pat LaFontaine?

Opportunities to meet Pat in person, or to see what the CiC Foundation is doing for kids in hospitals, are listed in the Events section of our website. Additional sponsorship opportunities are available at each of our events. If you are interested in becoming a sponsor for any of our events, or becoming a major donor, please contact us by email at jjohnson@CiC16.org

Can I get an autographed photo (puck, jersey, etc.) of Pat LaFontaine from the Foundation?

Because of the volume of requests for autographs, and the Foundation’s small staff and focus on Pat LaFontaine as an advocate for children’s hospitals, (and not as a celebrity), the Foundation cannot respond to such requests. The foundation will entertain autographs on personal hockey cards or photos in exchange for a nominal donation to the foundation. Any request must include a self-addressed and stamped return envelope.

Can Pat LaFontaine speak at my event?

Pat has a very busy schedule and is not able to attend many events. The Foundation will pass along written requests that it finds appropriate, but it cannot guarantee that he will be available or that you will receive a response from the Foundation.

Are there ways I can make a gift through a will or some other opportunities such as a trust, where I can help?

These gifts are also referred to as “planned”, “life income”, or “deferred,” gifts and can provide an immediate income tax deduction, as well as other benefits such as life income and avoidance of capital gains tax. They are also useful tools for estate planning.

Some deferred gifts, like bequests, provide gift and estate tax savings. Charitable remainder unitrusts, gift annuities, life insurance, and benefits from IRAs and pensions are just a few vehicles which our donors can use to benefit themselves as well as the Companions in Courage Foundation.

How much is expended for operational needs annually?

The CiC Foundation has been the recipient of some very generous gifts and donations in kind. We have therefore been able to avoid most of the administrative and operational expenses that other groups face. We pledge to our donors that we will continue to strive to keep our costs down in order to maximize the benefits of every dollar received. For more details, please see our listing at www.guidestar.com.

Is there anywhere I can go to learn more about the CiC Foundation including financial information?

Yes, please log on to our profile at www.guidestar.com

How do I sign up to be a CiC Foundation donor?

Online Giving allows donors to make charitable donations through our secure web site from the convenience of their homes or offices. Donations can also be made by check and sent to the foundation headquarters. For additional info please call: 914-325-4870.  Companions in Courage Foundation, Attn: Pat LaFontaine, P.O. Box 768, Huntington, NY 11743

Can I raise money for the Foundation?

The CiC Foundation welcomes “grass root” campaigns by “companions” looking to make a difference in their community. We are grateful for the support of people throughout the country who raise money for us through benefits, auctions, triathlons, etc. Due to the fact that we have a small staff and there are many generous people who want to support our efforts, we are not always able to provide direct logistical or personnel support outside of the fundraising events organized in-house. For additional info please email: jjohnson@CiC16.org

Because we are a small office, it is difficult to accommodate all the wonderful, enthusiastic people who want to give their time and energy to our cause. However, we do recommend that those who want to volunteer consider children’s hospital advocacy and awareness work at the local and national level.

All fields are mandatory